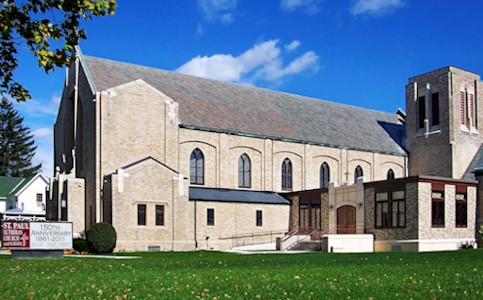 On April 14, 1861 a group of 14 men, recent German immigrantswho were at that time members of St. Martin Lutheran Church, met and organized a new congregation affiliated with the Evangelical Lutheran Synod of Missouri, Ohio, and other States which is now called the Lutheran Church Missouri Synod. They named their new church St. Paul.

Early meetings were held on the second floor of a hotel in Martinsville, which is now part of North Tonawanda.Showing its support for Christian education, a school building was purchased and the first school teacher was appointed on October 13, 1861 for the initial salary of $8 per month.

The first church building was dedicated on August 3, 1862 after which the congregation built a parsonage. The people of St. Paul then had a church, a school, and a parsonage, but it had no pastor.  From 1861 until 1867 the church was served by visiting pastors and lay readers from the congregation.  The first called minister at St. Paul was Rev. Carl Renz who was installed on November 17, 1867.  In that same year the congregation purchased the bell which still rings from the current bell tower before worship services.

About a year prior to the arrival of Rev. Renz, a large number of new members joined St. Paul.  The trustees from this group held the title to a larger school building located at 300 Old Falls Blvd. and it became the property of St. Paul.  The first St. Paul School was immediately sold at public auction.  A cemetery behind the church was used until 1887 when the property for the present St. Paul Cemetery on Wall Street was purchased.

The church building was enlarged in 1879 and renovated on August 11, 1911. The congregation went through the difficult but necessary transition from the German language to English language between 1916 and 1920.  Shortly after the installation of Rev. F.A. Hinners in1927 it became apparent that a larger church was needed for the growing congregation.  A building fund was established in 1928 and with the dedication of the present church was dedicated on April 18, 1937.  The old church was converted for use as a fellowship hall and was used until 1953 when the present fellowship hall was completed.  The old parsonage had been torn down to make room for the fellowship hall and in 1952 a home was purchased on Old Falls Blvd. to use as a parsonage until it was sold in 1998.

The Christian Day School building was replaced by a new school in 1897, remodeled in 1916, but was condemned and demolished in 1954.   Classes were then held in the lower fellowship hall and in the rooms behind the altar of the current sanctuary. A new school with rooms for preschool through eighth grade was dedicated on March 17, 1963.  The grade school program was discontinued in 2004.  The preschool program is continuing to serve the needs of the congregation and the community.

Since its beginnings in 1861, thousands of lives have been touched by St. Paul Lutheran Church.  Our current mission statement of “God’s love shining through us, opening doors and changing lives” is strong evidence of the commitment of our congregation to reach out with the Gospel message to the community and the world around us.   We have remained true to the faith and the vision that our forefathers worked so hard to preserve.  To God be the glory!